Over the weekend we moved a few things around and setup a small Roomscale setup to test out the range of the Oculus Rift CV1. While not nearly as extensive as some other tests, this was simply our way of trying out the “walk around” experience that was lacking in our old DK1.

The 9ft x 6ft space was defined by placing rugs on the floor so we could feel our way around the space and not bump into anything. Brute-Force-Chaperone if you will. We also disconnected the Constellation Camera and attached it to a tripod for a higher range. 7ft from the floor, to be exact. To the engineering team members that suggested a tripod-compatible camera mount? Thank you. You are the definition of forward thinking. 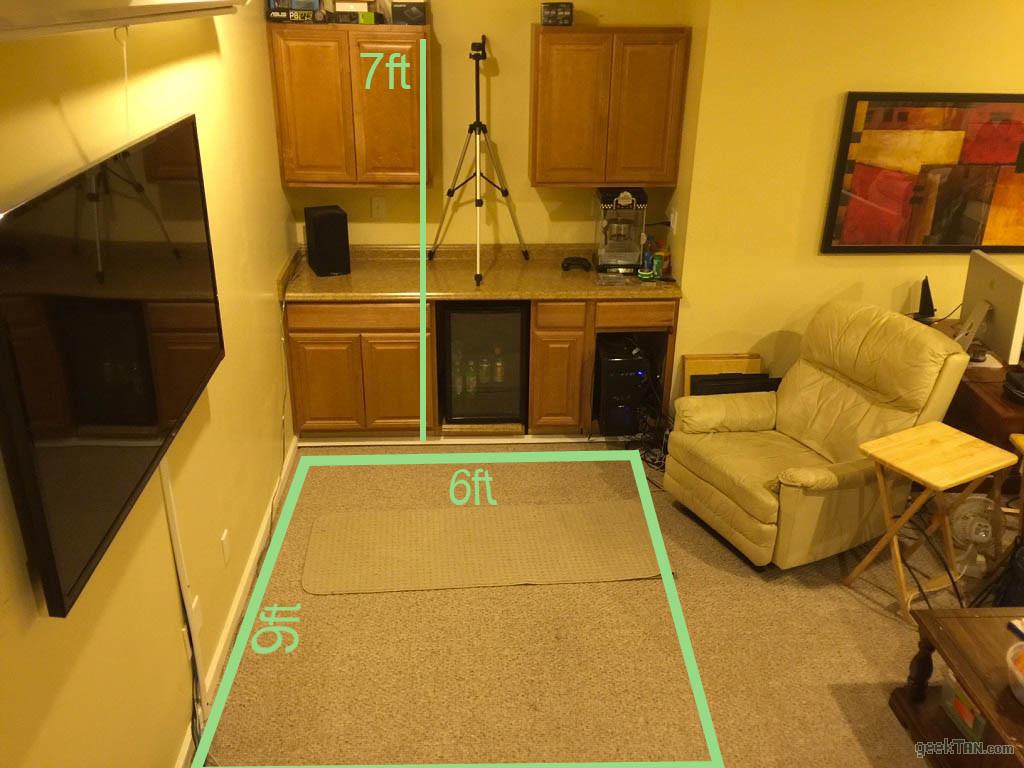 Next we attached the Leap Motion to the CV1 headset using a 3D Printed Leap Motion mount courtesy of Jonni from Thingiverse. It was a thin print and required a liberal amount of Plastruct Weld to keep it from splitting. I imagine a coat or two of paint would probably give it a little more durability as well, so if we ever decide to mount it more permanently, that might be an option. Instead we used a rubber band to attach the mount and the Leap Motion snapped right in. 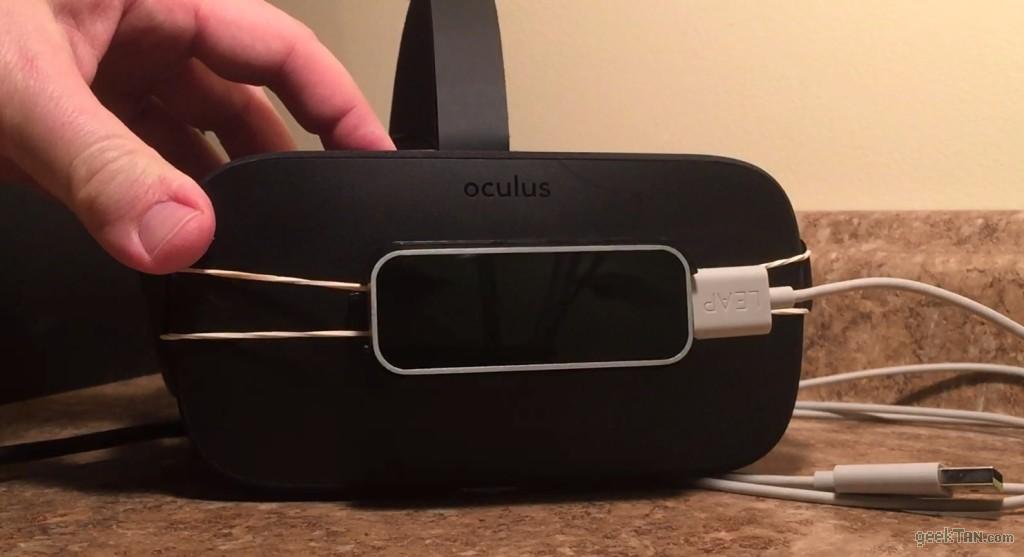 After going into the Oculus Home settings and allowing third-party applications, we downloaded the latest build of the Leap Motion “Blocks” demo and fired it up. The results were very positive. This was already one of our favorite demos on the DK1, and now that we had a higher resolution version along with head-tracking, it’s right at the top of our CV1 list as well.

As far as using “Blocks” as a Roomscale test, it worked to perfection. We stuck with the default HDMI setup of the cable plugged directly into the PC, so our range was somewhat limited, and fear of treading on the cables prevented too much movement, so I’ll need to find a way to get them off the floor. But overall we couldn’t be happier.

Tracking was flawless while walking around the structures and stacks of geometric shapes. In fact the only time we lost tracking was when we put our hands up close to our face for some close-up interaction, and even then it was just the briefest of flickers.

Below is a short video of us attaching the Leap Motion and my youngest testing it out. I haven’t figured out how to do the picture-in-picture format yet, so we did it old school with my monitor off to the side showing what he is seeing. My favorite part is when he accidentally knocks over a tower of blocks and instinctively tries to catch the virtual objects before they come crashing down. It’s happened to me as well. A true sign that VR is doing it’s job.

Here’s a breakdown of what you would need to try this yourself:
1. Oculus Rift/DK2 or HTC Vive. Each of these headsets support full head-tracking. ($650-$800)
2. A Leap Motion device available from their site or many other online resources. ($40-$70)
3. Leap Motion HMD mount. You can purchase one from the Leap Motion Store or 3D Print your own Leap Motion Holder here. If you don’t want to mess with either of those options, here’s a good resource for Do-It-Yourself Leap Motion mounting options for your VR Headset.
4. The latest version of the Leap Motion Blocks Demo.